The first minister’s aspiration to create a ‘world leading’ educational system suffered a severe setback this week when the latest results from the Programme for International Student Assessment (PISA) were published. Scotland has slipped down the rankings compared with its position in the previous PISA study in 2012.

In the earlier survey, the country was rated above average in reading and science, and average in maths. The latest figures put Scotland as average in all three subjects. Within the UK, England and Northern Ireland both achieved better results than Scotland. Sir Michael Wilshaw, outgoing head of Ofsted in England, said: 'Scotland used to be a beacon of excellence – it’s not any more’. The top-performing countries overall were Singapore, Japan, Canada, Finland and Estonia.

All such surveys should be treated with some caution. Much depends on the details of the methodology, the way in which data are collected and interpreted. Moreover, an educational system should not be judged solely on results in formal assessments. But the PISA study involved 540,000 15-year-old students across 72 countries so its findings cannot be dismissed. And although Scotland still performs comparatively well in global terms, it is the direction of travel that is worrying: the pattern of relative decline has been apparent since 2000. Of particular concern is the fact that Scotland has low numbers of very high-attaining pupils. In science, for example, fewer that 8% of Scottish pupils perform at the highest levels: in Singapore it is 24%.

Critics have been quick to offer a number of explanations. For the teachers’ unions, the main cause has been the financial squeeze on resources, with councils having to reduce the number of teachers and support staff. Others have blamed the flagship policy of Curriculum for Excellence, first planned in 2004 and introduced in 2010. The management of the programme has been fraught with difficulties. Teachers have complained that they have deluged with unhelpful 'guidance’ and required to complete an excessive amount of paperwork. Only recently has there been an attempt to free them from some of these burdens.

There are grounds for thinking that the causes are rather more deep-rooted. The SNP government has arrogantly dismissed concerns that have been coming from a number of sources for several years. Professor Lindsay Paterson of Edinburgh University has been a persistent critic of Curriculum for Excellence, arguing that its emphasis on vague ‘life-skills’ at the expense of knowledge has led to a dumbing-down of intellectual demands. The education committee of the Royal Society of Edinburgh has made reasoned responses to many of the changes: these appear to have had little impact on official thinking. Reform Scotland, an independent think-tank, has put forward various suggestions for improving provision. These, too, have been largely ignored.

Instead of listening to the critics, the government pressed ahead with its plans. It adopted a very directive role in relation to Education Scotland and the Scottish Qualifications Authority, the national agencies charged with introducing the new curriculum and associated assessment system. These bodies have come in for a fair amount of criticism, some of it certainly justified, but the evidence suggests that they have been subject to strong central direction from Scottish Government ministers and officials. Senior civil servants, with limited knowledge of education, have had a key role in the managerial drive which has swept aside concerns and pushed ahead with the political agenda.

In all of this, there has been limited input by the academic community in Scotland. It might be thought that a government that frequently boasts of wishing to develop 'evidence informed’ policy might make better use of the research findings produced by staff in university faculties of education. That has not been the case. Researchers have been viewed with suspicion, especially those who show an inclination to question orthodoxies and resist pressures to put a positive spin on their results. There is, in fact, a strong vein of anti-intellectualism within some parts of the Scottish educational establishment.

This is reflected in the courses of initial training offered to teachers which, in the opinion of many, offer inadequate preparation for the professional demands they will face in the classroom, particularly in terms of encouraging them to think of important principles, not just current practices. It is perhaps not surprising that Scotland finds it difficult to attract highly qualified people to teaching, especially in subjects such as science and maths. By contrast, Singapore recruits its teachers from the top five per cent of graduates.

The government’s preferred response to apparent weaknesses has not been to listen to the voices of classroom teachers but to launch a series of high-profile 'initiatives’, such as the Scottish Attainment Challenge, which promise much but, in the opinion of some of those who have to administer them, have not been properly thought through. The latest proposal has been to reform the 'governance’ of schools. This is seen as an attempt at further centralisation, masquerading as a plan to devolve more power to head teachers.

At a recent meeting in Edinburgh attended by primary and secondary heads, officials from local authorities, parent representatives and college and university staff, there was scepticism about whether the proposals would work. What was interesting, however, was that there was general agreement that underlying the current problems was a deep cultural issue: the tendency of too many people in Scottish education, especially at senior levels, to respond in a conformist and compliant way to ill-judged policies emanating from the centre. In other words, there was a lack of intellectual leadership. To improve our educational system will require not only an honest acknowledgement of where mistakes have been made, but also a willingness to engage with hard questions about the fundamental aims and values of schooling.

Is it likely that this will now happen, in the light of the PISA findings? Already the cabinet secretary for education, John Swinney, while describing the results as 'unacceptable’, has signalled his intention to press ahead with his existing programme. Initial responses from teachers (as judged by letters in the national press) have been hostile. They doubt whether carrying on regardless will be in the best interests of their pupils. A government that is convinced it knows best, that only listens to those who tell it what it wants to hear, that thinks that shallow rhetoric about 'excellence’ and 'equity’ constitutes a coherent strategy, and that seems to regard independent thinking as a crime against the state, is unlikely to be able to address the scale of the challenge that we now face. 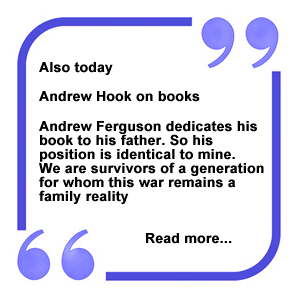 In today's cafe, two letters from abroad: Iain Galbraith from Germany replies to Reiner Luyken's article on the health service in Bavaria (which he compared favourably to the NHS in Scotland); and Donald Bathgate, writing from Turin, writes in praise of Catherine Czerkawska's piece on the nature of identity post-Brexit. Read more...

Prevailing opinion seems to be moving in the direction of Nigel Farage – for whom it is obvious that a single 52 to 48 vote suffices to
establish that the People of Great Britain demand Brexit. But this is not obvious at all. To the contrary, the 23rd June vote is best understood as the beginning, not the end, of an intensive period of popular debate and decision. While the 48-52 vote does indeed express widespread dissatisfaction with the status quo, the principle of popular sovereignty requires something more – an informed and deliberate choice of a new direction for Britain.

Catherine Czerkawska
England seems to be pushing the rest
of us away
05.12.16 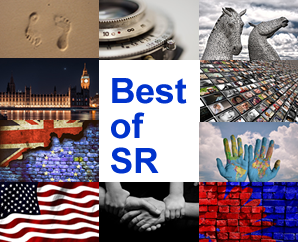 Kenneth Roy’s new book, 'The Broken Journey: a life of Scotland 1976-99', charts in vivid and compelling detail the events and personalities of the last quarter of the 20th century in Scotland.

Published in hardback by Birlinn, 'The Broken Journey' is available direct from the Scottish Review at £25 (inc p&p). To order your copy or copies, please click below or call 01292 478510 with credit/debit card details.